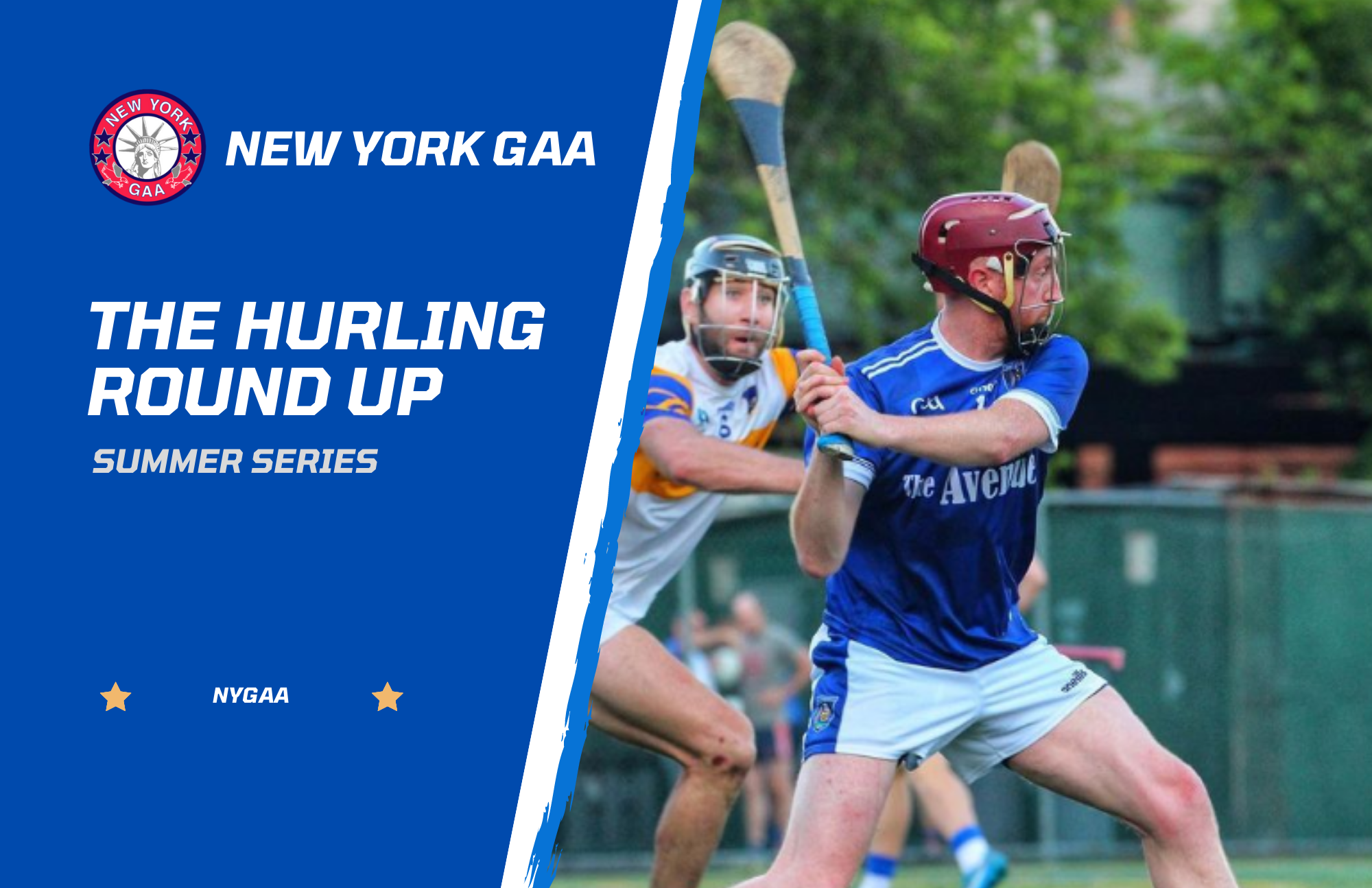 On a calm summer evening in the Bronx Hoboken Guards and Westmeath faced off in what many have described as the game of the season. Westmeath with their tails up from beating Waterford 7 days previous to keep their season alive looked to keep that momentum going, while Hoboken currently sits top of the table after a win against old rivals Tipperary in their last game.

The first half started lively enough, free takers Luke O’Connor (HB) and David Mangan (WM) trading scores. Within 5 minutes Westmeath had a 2-point lead again through Mangan and some good score taking from Luke Prendergast. Hoboken ever collected never panicked and within minutes had hit the Westmeath net for two goals both by Tipp man Jack Morrissey. Hoboken though would be dealt a big blow with tallies man and Captain Paul Gordon pulling up with what looked like a hamstring injury midway through the first half. O’Connor for Hoboken continued to tag on scores but Westmeath seemed to be able to find the posts that bit easier at times again through Mangan and Prendergast.

Although Hoboken led at the half 2-07 to 0-12 points, Westmeath seemed the happier group as the halftime whistle blew.

The second half really kicked into gear with goals aplenty, another by Hoboken through Dara Walsh and two from Westmeath one of which saw Sean Garvey tear through the Hoboken defense and blast the ball into the net leaving the teams level at the water break 3-12 (HB) 2-15 (WM).

The final 15 minutes were thrilling to all in attendance as teams traded score after score, again Mangan and O’Connor were deadly accurate from pace balls. Westmeath then began to get a foothold around the middle with veteran Ger McPartland controlling open play while also putting his name on the scoresheet. Fine displays from both center-backs Steven McAfee (HB) and Conor Dalton (WM) who contributed to end-to-end frantic moments between both sets of players. Westmeath would finally hit the front with a lovely taken score by Prendergast, another by Ciaran Kirwan, and a third by Sean Garvey. Hoboken though to their credit didn’t lie down and hit the net again to draw the teams level this time by Galway man Enda Fahey.

Westmeath would tag on two more points and reduce Hoboken to a long ball into the square as the seconds winded down on the infamous Gaelic Park clock with the buzzer imminent, ultimately they came away empty-handed as the Westmeath sideline rushed the field to celebrate their second win in a matter of days.

Probably the matchup of the day was Brian McPartland picking up Hoboken frontman Dara Walsh. Walsh while causing problems to the Westmeath backline and getting on the scoresheet wasn’t able to unleash his normal dominance in the game. Notable mention to Conor Ryan of Hoboken who really kept Hoboken in the game, winning dirty ball around the middle and a number of frees, most of which were in scoring range.

A very enjoyable evening in the park that certainly shakes up the Senior Hurling Championship as teams now stack close together on the league table and all results from here on out are crucial.

A game that had only one winner, who emerged minutes into the contest. Waterford NY came to Gaelic Park with a job to do, win and they were still alive, lose and it was going to be an uphill battle to make the playoffs. Tipperary who had just come off a loss to Hoboken needed a win to steady the ship and keep their hopes alive.

A widely anticipated game played in front of a good crowd in Gaelic Park labeled by some as the “Battle of the Bronx” between two sets of players who know each other well with some even roommates. Waterford got the faster start and opened a 1-03 to 0-01 lead within 3/4 minutes of Chris Dalton throwing in the ball. This trend would continue as Waterford piled on the pressure from all areas and really gave Tipperary no chance to get to grips with the game. On one side everything Waterford touched turned to gold and the opposite for the Tipperary boys who just didn't seem clinical in anything they did. Paddy Commins was in top form slotting over 3 from play and numerous others from frees in the open half, Deaglan Murphy also caused problems and some confusion for the Tipperary defense as he started in on the edge of the square. Waterford looked strong all over the field with center-back Sean Duffin controlling play and Jason O’Donohue who played as an extra defender cutting out any potential Tipperary attack. Tipperary fought back with points from Mikey Sheedy and David Pond to keep them in touch but really couldn’t make any inroads to attack the Waterford goal. Sean Elliot then slotted over two more points in quick succession before the half to put some respect on the scoreboard for Tipp.

Looking for a strong start and build on a successful first half Waterford hit the net again inside a minute of the restart this time through Aidan Organ. This really put daylight between the teams and Tipperary would never fully recover. Waterford continued to tag on scores with James Bermingham popped up at right half back to put his name on the scoresheet, while Jason Donohue also got in on the scoring action. Tipperary again tried to force their way back into the game and for periods tried hard and got the defacit back to 6 (2-12 to 0-12), but that would be as close as they would get. Waterford ran out comfortable victors on a scoreline of Waterford NY 2-19 (25) to Tipperary NY 0-12.

This leaves the Senior Hurling Championship wide open as the two bottom teams (Waterford & Westmeath) beat both Hoboken and Tipperary which now sets up an intriguing weekend of games next week. First Hoboken and Waterford will pair up to battle it out on Friday night, with Hoboken trying to clinch top spot and Waterford looking to make a Semi. And on Saturday Westmeath who has now won both of their last two outings will face off against Tipperary in a must-win game for both sides to keep their seasons alive.